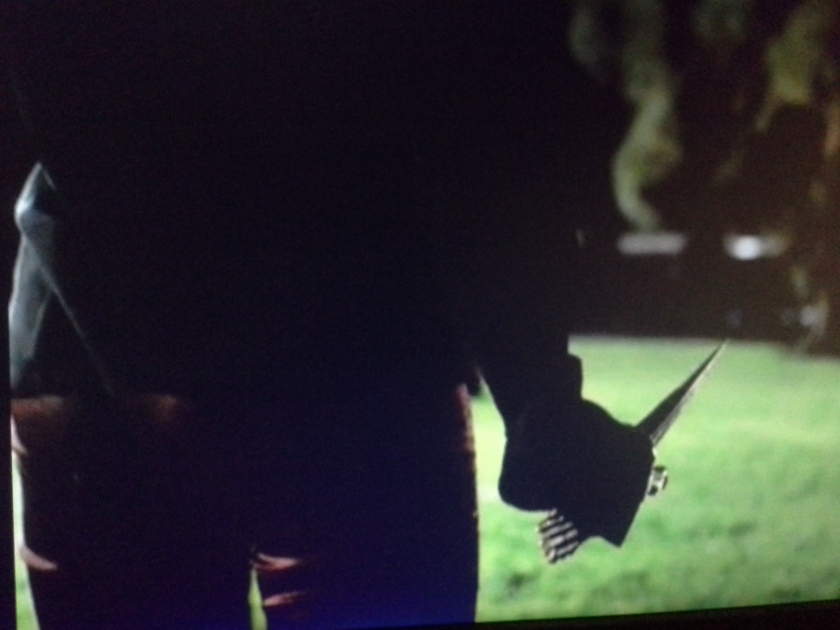 I’m a huge Joss Whedon fan.  But as much as I admire the series, re-watching Season 1 of Buffy the Vampire Slayer, I’m struck by the wildly disparate quality from episode to episode.  As a whole, the twelve installments are certainly lovable, yet marred by spans of such forgettable mediocrity, I feel lucky I started with the series during its syndication run, watching Seasons 5, 6 and 7 first.  Otherwise, I might never have survived Season 1.

That said, what’s neat is to witness the series molting from erratic, adolescent amateur to self-assured and cultured pro.  That transformation takes place during Season 1, ep. 12, the season finale.  Specifically, the intro segment of the episode contains the moment when the series hits it’s stride.  Buffy is attacked in the cemetery by the latest vampire.  The camera point of view is traditional monster-horror pic, with a closeup of the vampire’s sadistic grin:  he enjoys Buffy’s fear as he moves in for the kill.  But the rhythm of the editing is all camp.  As the camera pans behind her, Buffy produces a sharp wooden stake she had concealed beneath her jacket.  It’s an iconic image of table-turning reversal, a la the poster art for I Spit on Your Grave (compare screen cap of Buffy, above).

Thusly, Buffy flips the helpless-bimbo trope on its ear.  The narrative mood shifts radically from comedic-camp to slasher-horror, a la Friday the 13th.  Only it’s Buffy in the role of Jason.  Next image, a closeup of the vampire’s sadistic glee replaced by the frowning fear of mortality.  As Buffy sets upon the vampire, the action is filmed in a thrilling, Bourne-identity style, close-in combat realism.  Buffy charges, overwhelming the vampire’s strength with three massively powerful strokes.  She dusts the vamp in a rhythmic, athletic grace.  And one feels the series has turned the corner.

Even this show’s biggest fans would have to admit that, up to this point, Season 1 comes off as uneven at best.  Whedon’s biggest and most legitimate excuse?  He signed on to the WB lineup with Buffy as a mid-season replacement series; this meant he had to produce Season 1 in its entirety, without the benefit of audience feedback.  In other words, Whedon and company had to work in the dark, as it were, not airing episodes as they were completed, not knowing what worked and what didn’t, unable to recalibrate between episodes.

Episode 12 pulls the season together on the strength of Whedon’s story-telling chops.  He writes and directs this one, getting the narrative engine firing on all cylinders.  He amps up the driving force of the drama, centering it on an infallible prophecy:  that if Buffy fights The Master, she will die; if she doesn’t, human civilization will end.  Whedon stiffens the clout of the prophecy via the show’s two authorities on the dark arts–Giles and Angel.  Giles so recognizes the certainty of the prophecy, he determines to face The Master himself, in Buffy’s place, a mission of certain suicide, thwarted only by Buffy knocking Giles unconscious.  Angel, never one to shun a fight, steers clear of this one, knowing there’s no way to help the girl he loves and wanting not to witness her slaughter.  News of the prophecy reduces Buffy herself to a state of denial.  She begs her mother to take her on a weekend trip out of town.  Denial gives way to despair, and Buffy hands herself over to die.

The episode works beautifully as a season finale, with long-running plot pots brought to a boil.  Xander finally works up the courage to ask Buffy out on a date.  When she turns him down, he invites Willow, instead, who turns him down, too, fed up with being his second choice.  Miss Calendar emerges from the casting cocoon as an adult associate and potential love interest to Giles, defusing what potential creepy awkwardness there had gone before as Giles survived alone in a universe of teen hotties.  Cordelia gets in on the season finale action, saving Willow’s life in a suspenseful sequence by wielding an anti-vampire weapon available even to a newbie:  her car.  In all of these, the acting feels noticeably more human, the editing more on-task.  And the resulting air-tight thematics push the notion of being “the chosen one” to the realms of inexorable tragedy.